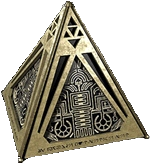 This battle left me with mixed emotions. On one side, it is exceedingly well crafted, as all Dempsey's missions. The plotline is very good and it features my Battle Team, which is probably a bias in my case. And the action is fast and arid, as it is supposed to be in the DB, where lack of material and technological resources is compensated with the Jedi abilities. But this means taking CRSs and PLTs and anything else with a limited if not completely devoid warhead payload, and gunning down fleets is very much annoying. Also, given the lack of GUNs, some capture operations will take ages for the TRNs to disable and capture. A pity, because without these poor choices in mission playability that drain playability dramatically, this battle could have been a golden classic

A very typical DB battle. You're dropped ~10 km from an enemy cap ship in a shieldless TIE/IN without warheads. Your mission is to find the sacred artifact then blow up the cap ships. That's three out of the four missions. Demps uses the nifty double platform design that we saw in earlier missions, too. It's challenging but mostly boring taking out VSDs and CRLs with lasers.

Technically excellent, plotline is average, but battle overall is fun and well planned. The order of the missions and the objective makes sense.

Excellent battle!! I specially liked the way of making the player to feel as if all events were occuring exactly in the same place while also making action to appear very dynamic. You actually get the feeling of being always doing something useful plot-wise, and I consider this very important in battle designing. The best from the battle? The Nav Buoy of course!!! xD

The ZIP file does not contain the LST file.

Mission 3: T/I Stingray have orders to disable the PLT Arcanist despite lacking ion cannons. This can result in its destruction and failure of the mission.

Mission 4: The CRL Hilfang and CRKC Bullhorn carry significantly more fighters than their 'stock' complement. Perhaps the additional craft should arrive from hyperspace instead?

This battle has been flown by 17 pilots a total of 24 times.