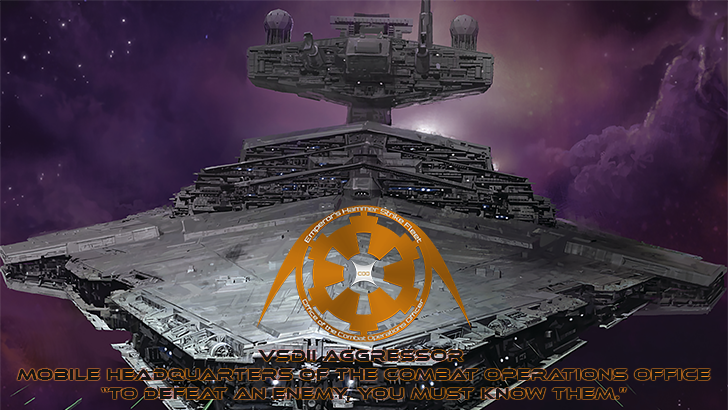 Admiral Silwar Naiilo grimaced. "A Victory-class Star Destroyer? Why are all the admirals so infatuated with these relics? The Tactical Officer's 'Sinister', the even older VSD-I class 'Stalwart' belonging to the Internet Officer, and now this, the Aggressor. I just hope the caff machine works on this bucket of bolts."

Silwar inserted his code cylinder into the slot next to his new office door, and a melodic chime announced that he was granted entry. He stepped through after the well-maintained door opened, quietly and smoothly. The office was surprisingly clean, despite its previous owner being covered in thick orange fur; the cleaning bots must have been tuned well to accomodate. A crystal decanter, a pair of whiskey glasses, and a coffee mug labeled "Galaxy's Best COO" were all that remained of its previous occupant. Silwar smiled and poured himself a drink. "To you, Miles."

I'll use this section to list out the things the Combat Operations Office is working on, outside of our normal duties like processing multiplayer matches and running combat events.

My first action as COO was to help HA Plif put together combat rating advancement medals for the active and reserves TIE Corps members. Those have gone out now, bringing everyone up to date as of December 3rd. My plan is to run this quarterly, so expect the next batch of medals to go out in early April.

Next up was setting up some inter-club events. The next Week of War will be hosted for the week following February 3rd; check out the Combat Events section below for more details.

Star Wars: The Old Republic was brought on as a new primary platform for the TIE Corps. We supported its starfighter combat modes in the past, although there wasn't enough interest to keep it around. This time, we've expanded the number of game modes allowed for recognition, including Flashpoints, Warzones, and Operations. We've also kicked off a number of competitions and a combat event to recognize its launch. This is the first new platform brought online since Star Wars: Squadrons was initially launched a couple of years ago, and we're already seeing lots of interest!

We've recently re-launched the Shootouts, a combat event that we run every Saturday evening EST until late, to encourage people to fly anything together. More details are in the combat event list below!

We've done some internal cleanup and process changes. For example, we have a template for new game studies as well as for this very report! I'm tracking COO initiatives on a public trello board; the link is below.

We're in progress on a game study of Elite Dangerous to understand how it might fit into our rules for earning legions and running competitions. This is primarily led by MAJ LegionX with support from a number of people, including MAJ Kalve Ryder and CPT Cade Tezo. This game has had a very wide audience during our test runs.

I'm looking at the proposed rules for Imperial Storm V. I won't say much more than that as it's the SIMS's job to announce - but I'm very much looking forward to it!

LT Blaster72 of Gamma squadron is currently in the lead for January's PvP Ace of the TIE Corps with 214 victories! He is followed by LCM TecGenie with 172 and LCM Maximus Meridius with 132; both in Gamma Squadron as well. The race for fourth is much closer, with LCM Delta Striker 4 in the lead by a mere two wins.

On the PvE side, GN Elwood the Brave of Gamma Squadron (seriously, what are they putting in the water over there in Gamma?) is currently in first with 271 victories. He is followed by LC Robert Hogan of Sin with 244, CM Wolve Excelsior Berkana of Lambda with 190, and finally CPT Gytheran of Lambda with 101.

There's still plenty of time for an upset!

Earn the most Legions of Combat and Legions of Skirmish while playing SWTOR, for Iron Stars!

Get together from 5pm to midnight EST every Saturday to play games together.

Fly SWS games against other clubs, hosted by Battlestats.

As a reminder: please submit all screenshots within 72 hours. All should follow the guidance listed out in the COO Manual, linked from the TIE Corps website and in the wiki. Please feel free to reach out to me or any COOA if you have any questions!